Unsubstantiated reports of a shooting at Jefferson High School on Monday afternoon led officers to lock down campus and investigate. It also briefly turned into a brawl between some parents and police – with one man now in the hospital.

The video was shown on SanAntiono media showing parents brawling, screaming videotaping on their phone while police scrambled to maintain control.

A parent at the scene was asked, “So, what’s going through your mind right now?”

Less than four months after the mass shooting that happened less than 70 miles from San Antonio: Uvalde still on the top of everyone’s mind.

Parents gathered outside Jefferson High School demanding information and for their children be released; fearful that another Uvalde situation happening: this time to their kids.

“We put together several strike teams that then entered the campus and did a sweep room by room,” Reyes said.

Meanwhile, parents are outside not knowing if or when they will see their children again.

“I’m just worried about the children, my daughter, my two daughters Katlyn and Sarah Estrada,” Estrada said. “I love you… your dad loves you Just don’t be in fear, you’re going to come out of their fine.”

After a while, police said there was no evidence of a shooting and no guns found on campus.

Parents demanded their children be released.

Eventually, reaching a boiling point where a man broke a window with a nearly one-foot-long knife. He cut his wrist badly. And then this happened:

Which erupted the scene into chaos.

Despite the madness, superintendent Jaime Aquino says his police response was executed flawlessly.

“Our kids were safe,” Aquino said. “We followed our protocol and our process. And we practiced for this, so I am proud that we were able to do that. I know we are living in very difficult times. But you need to trust us.”

But today showed a large gap in trust between parents and school law enforcement.

We are told the man who was sent to the hospital is okay. He will not be charged with any crime.

A fight between students turned into an active shooter lockdown Tuesday afternoon at Jefferson High School, which caused many concerned parents to rush to the campus.

“I am from Uvalde, and I understand those patents, school and police need to Somehow give more information at the moment to parents, I know they gave their Procedures to follow but communication is key in this situations, we want to trust, but at the moment is very difficult to do so,” Silvia Alvear wrote in response to the shocking video.

San Antonio ISD board member Ed Garza confirmed there was an altercation between students. At some point, a comment was made about someone having a weapon and that kicked in the active shooter lockdown.

San Antonio ISD Police immediately began an investigation and kept the kids safe inside their classrooms. During their investigation, school officials learned that there was no truth to the weapon allegation, but police are still adhering to safety protocols and doing a complete search of the campus for any weapons.

District officials say there is currently no evidence of an active shooter or of a weapon being on campus at all.

When parents arrived, they were forced to wait outside. No one can get in and no one can get out. One of the parents said he passed by the school and saw ambulances and cops on the campus and turned around to see what was going on. He said the first thing that popped out of his head was Uvalde.

One parent was seen attempting to break the window trying to get in. A cop tackled him down and soon after that, a brawl breaks out at Jefferson High. However, police say that the man was trying to break the glass with a knife. 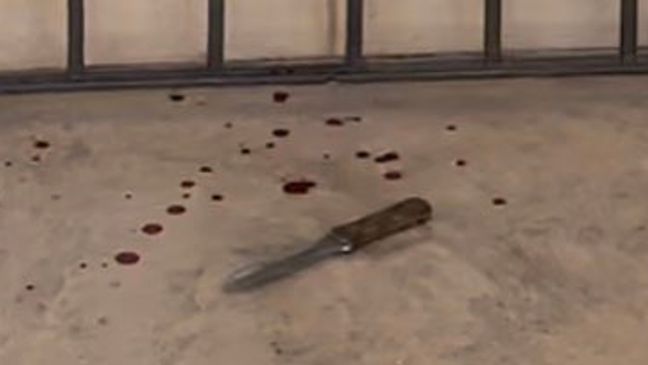 Parents who arrived at school were kept informed of the situation. As soon as the search of the campus was made, parents were able to pick up their kids.

According to the San Antonio Police Department, the school has been cleared and is deemed safe.

Remember The American Gulag: J6 Prisoner Savagely Beaten After Being Detained Over A Year And A Half Waiting For Trial- Denied Civil Rights

Topher Raps About Country And God: ‘Voting For Democrats Because Everyone Else Doesn’t Fill My Hunger For Knowledge’

This site uses Akismet to reduce spam. Learn how your comment data is processed.

You may have missed

Remember The American Gulag: J6 Prisoner Savagely Beaten After Being Detained Over A Year And A Half Waiting For Trial- Denied Civil Rights

Topher Raps About Country And God: ‘Voting For Democrats Because Everyone Else Doesn’t Fill My Hunger For Knowledge’